Hope you guys are liking these things. They seem "simpler" than previous works, I think, but that art took some time.

Got some exercise today, but what I SHOULD have been doing was art and chores. Damn this demanding human body!

Sorry I'm a few hours behind. I need to get used to having a comic again!

Got a few days off coming up finally, thank goodness. I can use that time to get more prepped.

So, it's finally launching, the long-awaited next project. It's going to be another 2x-weeker, Monday and Friday; at least I'm gonna try. We all know my history of "production problems," but I've got a pillow now and I'm going to try to not let it go flat!

So, what is this thing?

Well, I commend my audience for being very patient and supportive with my story stuff, but I know there has also been a quietly steady wish to see more gag work. Well, wish granted, Audrey is attempting to bring the funny once more.

Unfortunately . . . I am bringing MY definition of funny, which has gotten a tad twisted. I have no idea if anyone else is going to get mileage out of this, but I am at least willing to try.

My work is frequently influenced by the people around me, or to reverse the order, sometimes a friend will inspire a particular project. You saw that before with my friend Yvette and "Fujoshi Life." Unfortunately, this project is based on a friend with whom my relationship is a little more . . . complicated. Consequently, this work is a little more acidic - it's potentially the cartoon equivalent of a diss track.

You ever have a friend who you care about dearly but kind of drives you nuts? Who makes some terrible fucking life decisions but you can't bring yourself to cut off? A friend you want to help, laugh at, hug, and slap across the face, sometimes simultaneously?

You ever wish you could change things for that friend a little? How about . . . A LOT?

Let's go on an uncomfortable journey together. :-)

I put this up on the whiteboard at work, I figured you guys might like it too! 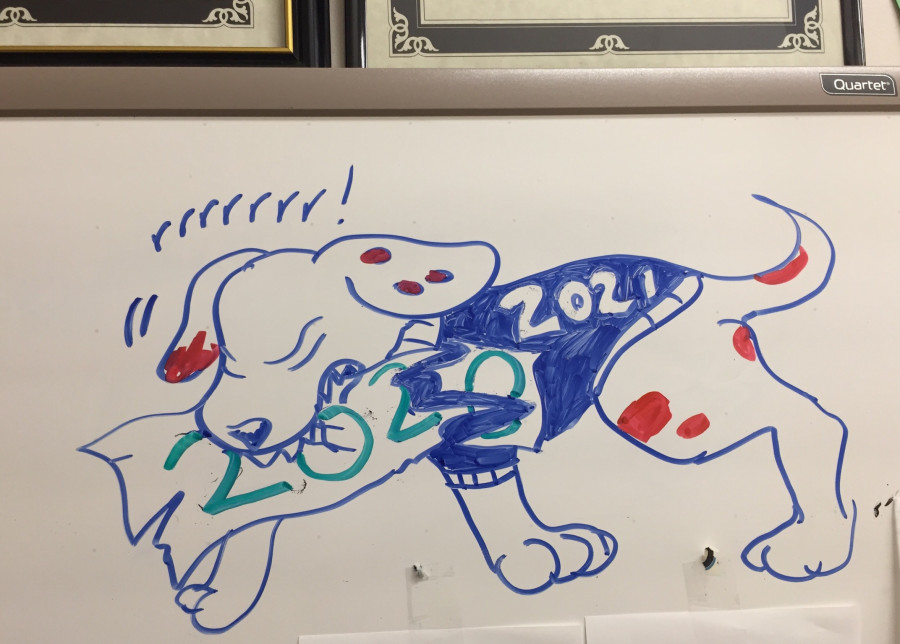 In extra news, I’m finishing a logo and title page for the upcoming project, and it should launch in just a couple of weeks!

This means I can start putting it up on the website as a serial, and I will attempt to do so at the start of the new year. I think it will be a lot of fun. And I'll keep poking away at Dr. Bitey, and then I can maybe run that intermittantly between "book" updates.

Well, that's a load off my mind.

P.S: I had a feeling that the book wouldn't get through, and I don't really mind that, but the rejection letter had something of a "don't talk to me or my son ever again" flavor to it. ;-)

Okay, I've gotten the first ten strips of the new project roughly scripted and I've finished the new logo. I'll run it by Nat, he has a good eye for these things, and probably some good ideas of what the new subsite should look like. Now I just have to FINISH the stupid thing.

For those of you who miss me doing gag humor, I think you'll be happy with this one.

In the meantime, allow me to entertain you with my pathetic and ignorant attempt at a meme! 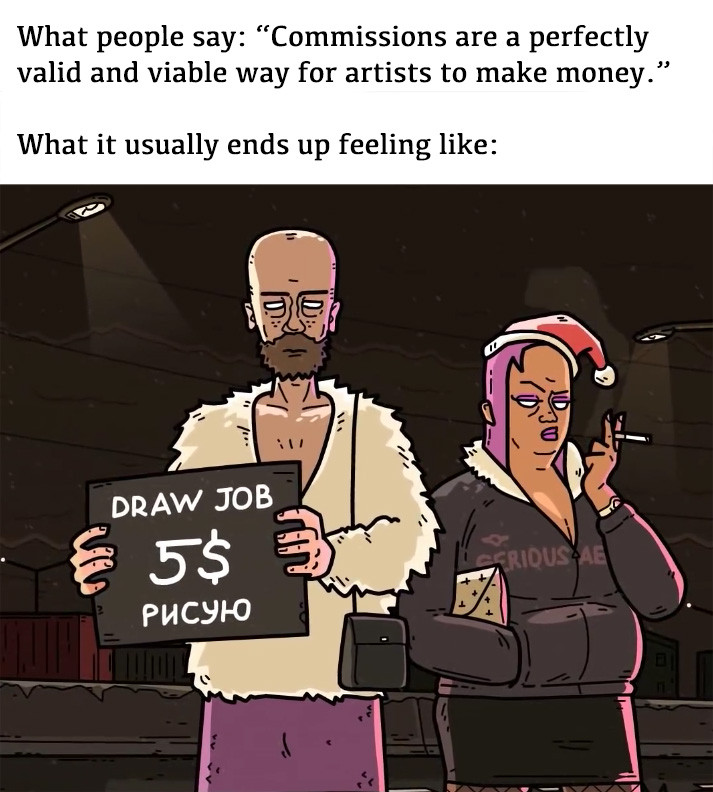 Also the image is a screenshot from a work by Lazy Square. If you want to see a bunch of short, dark, hilarious and extremely well done animations by a talented and bitter Russian, you know where to go!

Production is slow and laborious, so here's an art meme in an old format to fill up a little time! 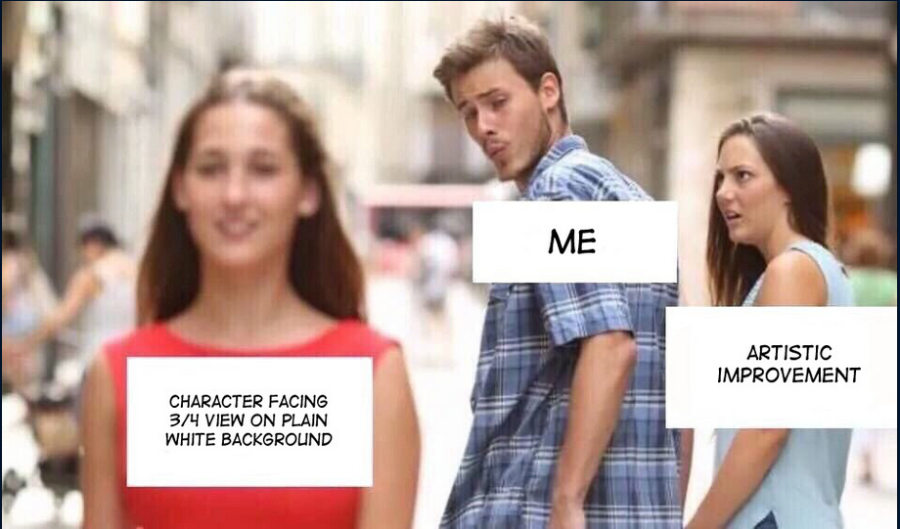 Oh boy, another one of these!

I’m being taken out to Filoli Garden for my birthday, so I only just have time to quickly post something - here is the first sketch I ever made of the characters for Project Circe. 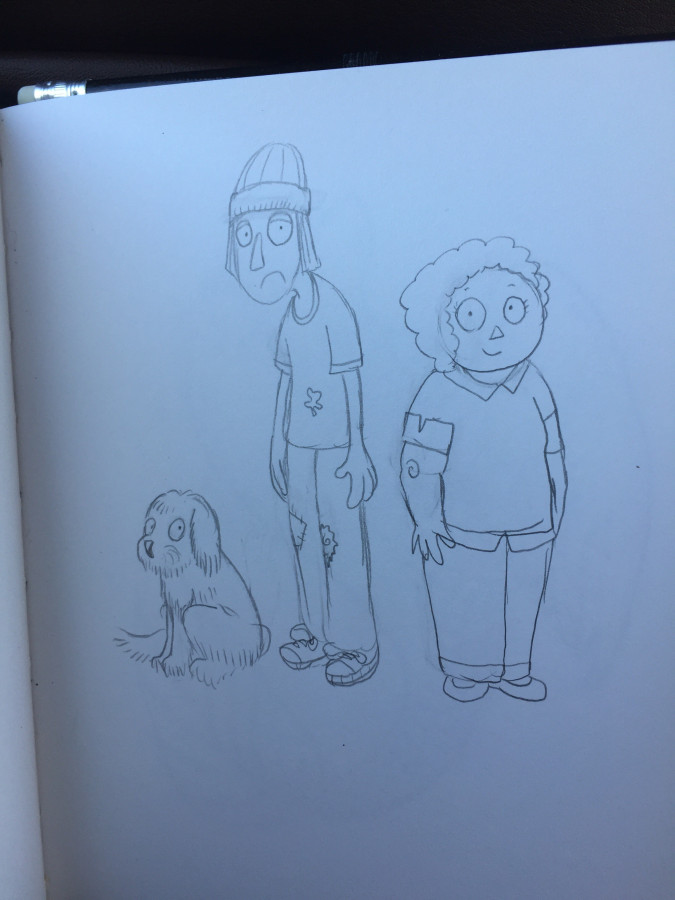 Still can't believe it. My guts feel like I ate an entire bag of gummi worms on top of at least a pound of cooked, unsauced spaghetti.

I submitted a book pitch.

Spent the last couple of weeks going hard on sample pages. Did some market research. Wrote a pitch. Strapped everything to an email and hit "send."

And yeah, I'm still all jittery and stuff, but the fact that I DID it was something I was not ABLE to do before. So, almost no matter what happens, I'd say it's a victory.

Now I hope they hurry up and reject it so I can put it up on the website for you! :-D

So, I haven't been sitting here sucking my thumb and also with a thumb in my butt, and also occasionally forgetting myself and swapping thumbs. I have, in fact, been working on the the oft-spoken-of-but-yet-to-be-revealed Project Circe. So far, I've got about eight pages of it done, and it's coming out rather interesting! There is one little kink in the hose, though.

I'm prepping this as a book pitch. I want to try and sell it. I have a publisher in mind for whom it would fit the catalog, and after all this time cowering in darkness, I think it's worth a try.

If it gets rejected, GREAT! We can streamline its release directly to you!

If it gets accepted . . . . well, long shot, but UH OH. I will no longer have anything available to release to the site. I'll still have Two Pots of Tea to work on, but unlike Circe, that's not funny. I know you guys like / have been missing funny. I would like to give you funny. :(

SO, if I'm going to embark on what I consider a two-track existance - one funny, one not - then I'm going to need a new idea for the "funny" track. I ran the problem past Yvette to see what she thought. Her suggestion was this:

My buddy Chloe is working on scripts for a vampire-themed action comic. While she was working on that, I came up with the idea of intermission filler featuring a cute, funny vampire character called "Doctor Bitey" who answers "letters from children" with questions about what it's like being a vampire. It's gag-a-day style and since it looks like Chloe's project might take longer than expected, and might not even need the filler, I could probably just do it now.

Does that sound like something you would like to see? If not, is there anything else I've mentioned in the past that piqued your interest?
Collapse